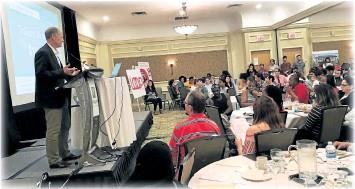 Maissa Saleh desperately wanted to move her three children out of the family’s Parkdale apartment because she didn’t want them becoming influenced by the neighbourhood’s unsavoury elements.

“Parkdale is not a great neighbourhood because of the drugs and everything,” she said. “I don’t like my kids leaving the apartment, and even though they’re older, we do all activities together unless they’re just going to school. That’s the fear I have with this neighbourhood.”

As a City of Toronto employee, Saleh has a decent income — but, as a single mother, the city’s skyrocketing housing prices have rendered her salary insufficient to buy anything big enough for a family of four.

Yet, when Saleh saw the Loop, a 62-unit, four-storey midtown stacked townhouse development, she knew that’s where she wanted to raise her children. There was just one catch: She could only
get an approved mortgage for a twobedroom unit.

Enter Trillium Housing, an innovative non-profit mortgage assistance program that defers repayment until a home is resold or refinanced. Furthermore, it helps buyers with down payments, reduces leverage and carrying costs, and has zero monthly payments. Through Trillium, Saleh secured a 1, 240 sq. ft. threebedroom unit. “With Trillium I had to deposit five per cent and they will mortgage the difference,” said Saleh. “I was eligible for two bedrooms, but Trillium helped me a lot and went above and beyond, because I have three children.”

However, to protect the purchaser if there’s a drop in the market and they’re forced to sell, Trillium assumes 50 per cent of any loss — a bigger proportion than its mortgage investment. “One of the things we’re trying to do with our model is help families get into homeownership so that they have family equity,” said Joe Deschênes Smith, Principal of Trillium Housing. “We asked ourselves, ‘How can we support housing affordability without big subsidies from government, and how can we set people up so they don’t need them in the future?’” The resulting equity families build can then go towards their next home — this time without a Trillium Mortgage — while Trillium uses monies accrued from the appreciation to invest in more mortgages.

Prospective buyers have to first qualify for the Trillium Mortgage, and Deschênes Smith says Trillium Housing has a pool of roughly $4 million for Loop mortgages. With the assistance already provided for the Loop, Trillium has averaged $90,000 per Trillium Mortgage, which saves each family around $400 a month. “We’re talking about a family of four on an income of $68,000 owning their home and having their kids each with a bedroom,” said Deschênes Smith. Councillor Ana Bailão of Ward 18 Davenport, who’s also Chair of the Affordable Housing Committee, says programs like Trillium have become crucial to preventing an exodus from the city.

The city’s current 10-year housing plan expires at the end of 2019, and consultations on a new plan don’t begin until next year.

In spite of other affordable homeownership programs like Habitat for Humanity, Options for Homes and the Fair Housing Plan, Bailão says all three levels of government need to keep streamlining their efforts to tackle what she calls systemic issues surrounding affordability. Whatever the solutions to affordable homeownership are, they’ll take a few years to manifest, and that makes programs like Trillium’s imperative to helping Torontonians like the Saleh family afford adequate housing.

“I appreciate what Trillium did for me,” said Saleh. “I’m thankful for that program to help my kids live in a better place. It would be impossible otherwise.”